Out now (well, as soon as the publisher finishes updating their site, anyway, ahah): Loveless, a vampire erotica short story by me.

Loveless has had an interesting life. I wrote it in 2007 as a submission to an anthology. It got rejected, so I put it on the shelf and mostly forgot about it, dusting it off only when a European literary agent asked to see some of my work a little while later. I never heard from the agent again and the story went back into the drawer.

A lot of the imagery from the story got incorporated into the Wolf House books, which I started writing a year later. Anyone familiar with those novels will see early echoes of scenes and characters in this story.

Fast forward to 2013, and I get a message from a girl in Croatia. She's loved a story of mine for many years, but has always wondered about a particular translation of a word -- what was my original intention?

Utterly puzzled, I wrote back, and discovered that the agent I'd sent it to so long ago had sold it to a Croatian-language horror collection. I was (and remain) a little too baffled and amused to be all that put out by the intellectual property theft -- after all, if you're gonna get ripped off, it's nice to get ripped off in such a weird way that it makes for a good dinner table anecdote later. I have a copy of the horror collection on my shelf now, along with the legitimately published versions of my stuff.

Until the message from the girl, I'd completely forgotten the story ever existed, but having been reminded I went back to it and decided to give it another try out in the world.

So, thanks to the lovely and generous Clandestine Press, here is Loveless, finally having its turn. I hope that, as well as being the first sketches of ideas that became a series of novels, as well as being the subject of international copyright violation, it also stands up as a sharp little story about vampires, and maybe about love.

Patchwork Children is a free, downloadable zine produced by me and featuring work by a variety of contributors. Raw, clever, profound, and strange, this collection stitches together disparate notions about the body, the self, art, revenge, magic, technology, analysis of nineteenth-century science fiction, viscera and dreams. Like, okay, when I was twelve and choosing what high school to go to, I was all "I want to go to Indooroopilly High because it has a film program" and my teacher said to my mother "Indooroopilly High isn't right for Mary, it's much too rough, she needs somewhere like Hillbrook".

And I went to Indooroopilly High and had a film program and it was rough but I thought for a long time that probably all high schools are rough, until I moved to Melbourne and experienced social dynamics based on class privilege that just aren't present in Brisbane in the same way. And after that I understood that no, not all schools are like the one I went to, and the people who come out of the other sort have a very different view of themselves and the world.

And I don't know, it's weird. I don't especially believe in the idea of an intrinsic self -- in fact, to put it bluntly, I don't believe in that at all. I don't believe we exist distinct from our bodies or the physical realities of our brains or our experiences or our society or time or place.

And I remember being twelve and writing in the 'what I want to be when I grow up' bit of our primary school yearbook that I wanted to move to a bigger city and to be a writer.

So it's totally possible to say that there has been a single consistent arc to who I am, that I'm someone who wanted X and Y and wasn't scared of going to a rough high school to learn the things I wanted to learn, who did move to a bigger city and become a writer.

But there's this voice in my head that's always BUT WHAT IF THAT ISN'T REALLY ME? What if I *am* someone who should have gone to Hillbrook? What if I'm *not* someone who moves to a bigger city at 21, I just thought that I was?

And it gets to stupid, stupid extremes as an anxiety. Like the other day on the way to work I was like oh god what if I don't actually like horror movies at all, what if I actually like romantic comedies and I just don't know that about myself? Ignoring the fact that horror movies genuinely make me really happy, and I loathe most romantic comedies and would rather eat mud than watch the vast majority of them.

Or I'll be like oh shit what if I just THINK my favourite character is that one but really it's this other one and I've just been lying to myself the whole time. This is one that crops up in my head a lot even though it makes literally no sense. If I think a character is my favourite that is the actual definition of them being my favourite, and yet I'm like but wait no what if I'm kidding myself.

I have a red wallet and a red purse and a red mp3 player and a red coat and have owned many pairs of red shoes over the years but often go BUT WHAT IF RED ISN'T REALLY MY FAVOURITE COLOUR WHAT IF I JUST THINK IT IS?

I don't know if there's a way to stop feeling like this, or if it's going to go away one day, or if everyone feels like this and I just don't know that. 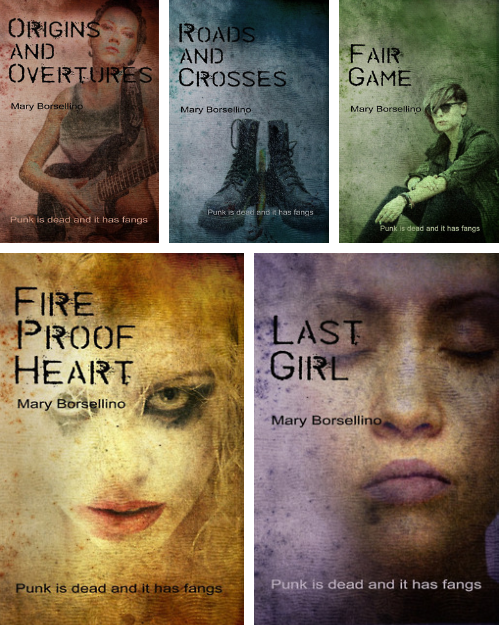 I am so, so sorry about being so terrible at keeping this journal remotely useful. But, um, if you click [here], you can find all five of the Wolf House reissues? So that's pretty neat I guess?

The new version of the Wolf House website is currently under construction and I'll give everyone a headsup when it's live too.

Audiobook version is apparently well underway which is super-exciting! Though I'm slightly nervous that it'll be too mottsy for me to listen to it, not because of anything in the story itself but because those words are my words and some poor actor is being forced to read them.

Anyway, yes. Here it is. It's pretty much exactly four years ago that I started writing these in the form they're in, and here they are in their second edition with a new publisher and new covers and bonus content and a thousand, thousand memories wrapped up in every page.

The books and zines page of my site is updaterated once again. My story 'Blush' has been selected for the Best Women's Erotica 2013 collection, which is pretty neat as it's a story I don't think is terrible.

I've submitted a bunch of horror stories and a sci-fi story to various upcoming collections, so hopefully future updates will see the page become a little more genre-balanced, ahahaha.

A trustee of the Horror Writer's Association contacted my publisher and said he'd feel really good about nominating Mixtape for the Stoker Award, which is the most prestigious literary award for horror and has been won by Stephen King, Joyce Carol Oates, Ray Bradbury, and Anne Rice in the past.

But cos Mixtape came out last year it isn't eligible to be nommed this year.

Seriously though it's a fucking honor just to be considered like that, how great, aah.

I know I'm way behind in emails and in being a good and present friend and just ugh, I'm really sorry everyone! I am going to try to not become completely useless this winter for a change -- I've ordered a full spectrum light and have heard that using one can really help a lot. Fingers crossed? And I will catch up on comments soon I swear. Really. Um. :/

Anyway in the meantime there are a couple of new things on my books page. I'm glad to see the Wolf Girls anthology -- stories about female werewolves which is pretty fucking awesome you gotta agree -- finally see the light of day, as it was tangled in delays for a while.

I've given up on Candy Butchers as a failed experiment and am now attempting a gothic-ish novella for my 2012 project instead. So much for having a break and attempting to not be crazy anymore, ha ha! Urf.

I'm putting together the bonus content for the back of Wolf House book two. The fan art I've collected can be seen on THIS PAGE. If you've done anything that you think should be included, please check whether I have it there. If I don't, send me an email please!

It's a very weird experience putting these new editions together, because my default position on my writing career is that I'm an abject failure, and then I collect all the pictures people have done and I'm just like oh wait um I guess that maybe I was incorrect in that, I don't know, feelings are confusing.

Also I'm super-super sorry for being behind on comments. I'll catch up soon, I promise. xx
This entry was originally posted over here and has

I have been in bed all day with a headache. Every year right around this time, Melbourne starts kicking me and doesn't let up until September. Months and months of endless pressure headaches and needing a cane for my bad knee and miserableness. Yay!

Seriously though being stuck in bed sucks a lot but luckily I can put the font on my kindle up until it's big enough that it doesn't hurt to focus on, even if I do kind of feel like I'm reading a Spot picture book with the text that big. Spot Goes To Westeros. I cannot see it being the big new hit somehow.

comments at the moment.
Collapse